Not a beginner friendly gunpla 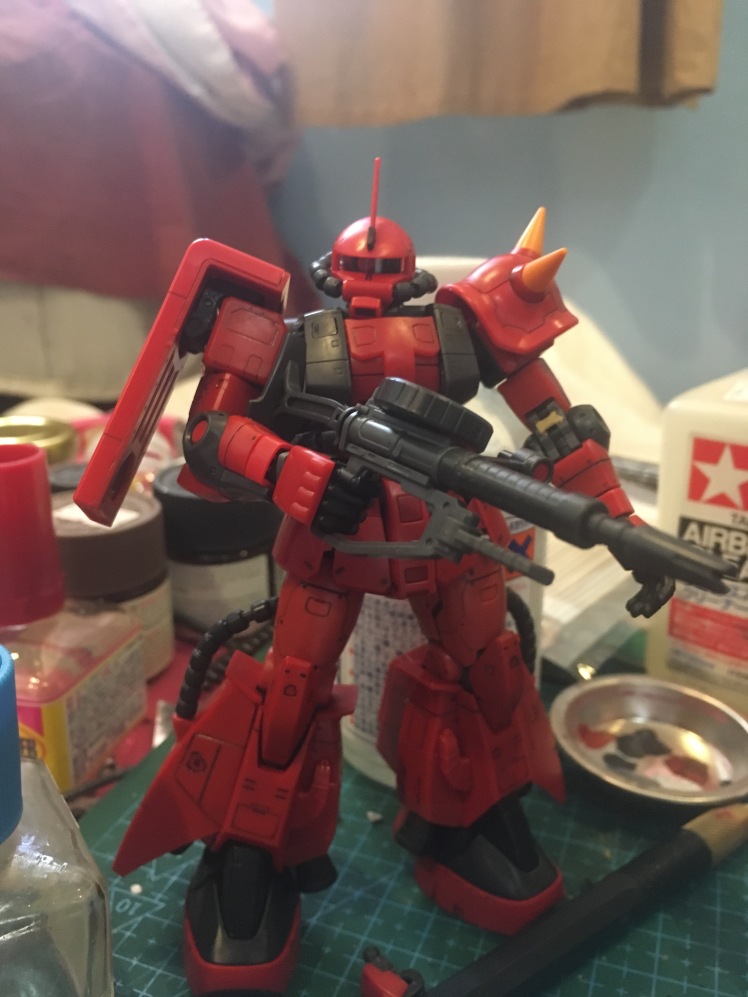 Hello and welcome peeps! Kimi here and I’m back with a new Review for the RG 1/144 MS-06R-2 Johnny Ridden’s Zaku II, it has been a quite interesting week for all of us here. We have been graced with new Gundam anime, new retail HG kit announcements, and some pretty awesome P-Bandai announcements as well.

We are going to have one very interesting Let’s Talk Gunpla segment this week and one that I’m really looking forward to doing.

Though the same cannot be said for the review of this RG kit. Its been awhile since I struggled with a kit and writing the review of and this one I will talk about in this review of mine.

Before we start, I know that usually, we would have the history lesson first for this kit. However, since we have already covered that with the MG variant let me instead direct you guys there if you guys want to read it still. Click on this link to read more on the history and my review of the MG version.

Speaking of the MG variant, as some of you may know I adore the MG kit. I considered it as the most perfect variant of the MG Zaku II Ver.2.0 kits. It was good, well made, rugged and most of all fun. The RG variant, however? It was the opposite if I may be frank, admittedly though it does get something right.

Let me explain why. Let’s first talk about everything that is wrong about this kit, shall we?

First and foremost, the parts. Last week we talked about it looking cheap, but after this week I could say that it just doesn’t just look cheap, It felt cheap too. Everything is either really fragile, loose or just didn’t fit all that nicely. It is far removed from the solidness of the previous RG Unicorn release, heck even the Gold frame holds itself better then this kit if I may be honest.

It’s like they made so much progress with the RG line and for this, they decided to just not use all that they learned in this kit. Not to say that is what they did, but it sure felt like it when I build this RG kit. Yes, I know Bandai was really being lazy again and reuse most of the parts from the previous RG Zaku II kits, but with some new parts replacing the old I thought that they would improve on its overall design but noooooooooo.

The other thing that this kit does that managed to cheese my nuts off is the articulation. Why the articulation you may ask? Well, remember when I said this kit had some pretty fragile and loose parts? Yeah imagine trying to pose this thing with all of that loose parts, it’s like trying to build a sand castle in a hurricane. After a while, you just stop trying to pose the thing. I know you can resolve the matter with gluing up most of the parts but if the issue is on the fundamental parts of the kit, like the top half and the bottom half is loose as hell, any potential that this kit might have is really ruined by just that fact.

Despite all of that annoying issues, I can’t deny the fact that I still love the kit. Why? Honestly, I don’t know myself, if it’s any other kits I would really flip by now, but somehow this kit just managed to just get me. This kit is hard, not for the right reasons but for the fact that it challenges you to solve issues that are outside the manuals. It challenges you to just be at your best all the time and as strange of me to say this, this kit has managed to be a frustratingly fun kit to make.

I keep finding myself smiling more then I was frustrated when making this.

This you would find if you manage to get through all the issues and its faults, the end result of this is satisfying. This is by far one of the most detailed, and the best-looking RG kits I’ve seen and when I compare the looks both the MG and RG variants, the RG came out well on top of looks department. I feel if they ever decide to make a new version of the MG I really hope that they would take notes from the looks of this one because this one really has the best look out of all Zaku kits I’ve seen.

This is probably one of those kits that I really struggle to review due to its polarizing nature, a kit that is frustratingly bad but good. One that rewards you if you can endure the torture, and one that is suited for the masochistic Gunpla builders like me…..

This is really a kit that I wouldn’t recommend to the uninitiated and beginners, but to those that seek challenge and is willing and patient enough, go ahead and give this one a try. My only advice to those that do? Just be patient and you shall be rewarded.

As well prepare some ointments for your fingers, because this is going to hurt…..a lot.

With that, ends my review of the RG 1/144 MS-06R-2 Johnny Ridden’s Zaku II, a kit that is both frustrating and fun to build. What do you guys think of the review and this kit? To those that had gotten this kit, I really want to know your thoughts on this, do you guys face the same issues? Do let me know your thoughts on this post and of the kit in general! As ever we do look forward to reading and responding to your comments and thoughts! So, don’t be shy to type away!

We will be back with more Let’s Talk Gunpla Segment on the next coming Wednesday and one that we are quite excited to be getting into! As ever we will be back as well on the coming Sunday with a new Unboxing or a short review! So, do look forward to that!

As ever please do leave us a like if you enjoyed this article, as well do give us some feedback and comment if you think we would be able to improve further in making sure that we can give you better content in the future! As well, we want you to know that your likes and shares would be highly appreciated in supporting and helping us grow further, honestly, your love and support means the world to all of us here in Kimi the Builder Blog editorial team.

We hope by sharing our love for Gunpla would be able to make your day and hopefully reignite your love for gunpla. We just hope that you don’t start your gunpla adventures with this one though.