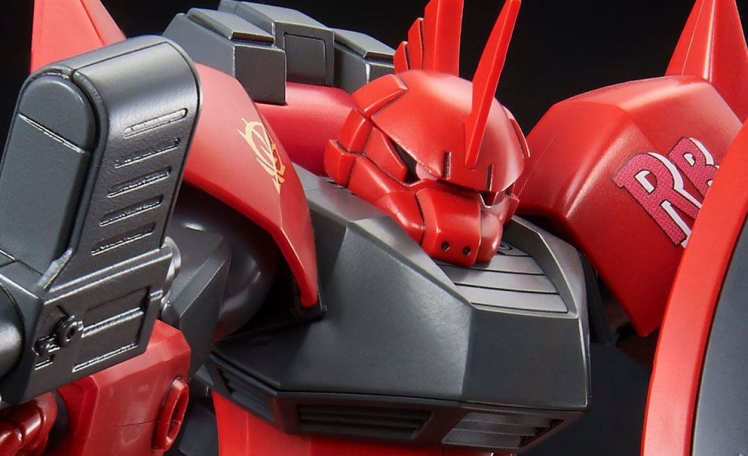 we see red, white, black and a whole lotta grey this week.

This probably one that we kind of has a trouble with. Well for starters…we really didn’t realize that this is a Gunpla announcement at first, because you have the Robot Spirits version (that was as well released under the P-Bandai tag) announced at the same time as this.

So, we were at first wondering why in the name of god P-Bandai is announcing two of the same thing. We really struggled to know which version is which at first. Since all of the promotional materials were in Japanese (and none of us speak or read fluent Japanese)

Well, that is up until we realized that there was an HG tag on one of the announcement. Yes, were a bunch of nincompoops for not realizing that earlier. But hey at least now we know which is which now eh?

Anyways, we should say that we are glad to finally see this being made because this is probably one of our fav HG Gelgoog variants out there. This P-Bandai HG Johnny Ridden custom, sporting the same red color scheme as the HG Relgelgu that was announced a few weeks back, does look pretty impressive in its awesome Red and Black color scheme. Like the previous Gelgoog P-Bandai HG variants that we’ve seen here (yes so far we only have seen the Anavel Gato’s version), there is no major changes were made to its overall look when compared to its retail predessesor..the HGUC MS-14A/C/S Gelgoog variant. But not to say they didn’t make any changes to this variant at all.

Well, the only obvious changes made to this variant could be seen on the Johnny Ridden’s custom is on its backpack, Still, we wouldn’t say that they do much to it. This is because it basically still looked pretty much like the backpack system from the Previous retail HGUC MS-14C kit but minus the cannon attached, yeah that’s all they did to this. But that’s not to say that is a bad thing, because the changes made to it is enough to make this look pretty awesome, not to mention that the decals on the kit as well made the Johnny Ridden’s custom look pretty badass.

On the equipment side, the Johnny Ridden Custom comes with all the same weapons and manipulator set as the one seen on the retail variant. However, this version does get the iconic bullpup bazooka gun-gun thing here, unlike the MG version where they omitted it from the whole kit, this, however, comes together with it. Really, it wouldn’t make sense to omit this out from the whole thing, since we do believe this defines this variant over the other Gelgoog Variants out there. We are as well glad to see it is still looked as ridiculous as how it was back when it first debuted back in 1984 with the MSV kit line up.

We honestly love this cute and stout bazooka gun thing.

Though it was more surprising to know that this was made under the ACE PILOT LOG P-Bandai kit line up! After the release of the Anavel Gato’s Rick-Dom, we were wondering if P-Bandai would stop releasing new HG ACE PILOT LOG KIT since there weren’t any new HG kits under that line up that was announced. So you guys can Imagine how glad we all felt here when we heard that P-Bandai is still planning to release kits for HG under this lineup.

Though that is not the only HG ACE PILOT LOG kit we are getting in this coming October this year….We are as well will be getting the

And it is one that looks EVEN better when compared to Johnny Ridden’s version.

Though unlike the Johnny’s Gelgoog which does come with a new sick ass decal, color scheme, a redesigned backpack (from the MS-14C’s backpack) and some sick ass bullpup bazooka. This version of the Gelgoog Jaeger, only gets a new color scheme, Two beam sabers, and only one decal sticker. No sick ass bazooka or anything….

Looking at these two, really makes all of us here feel like completing our Zeon HG and MG MSV kit collection…just to really complete the cycle of owning this two awesome looking MS’s.

Though we are currently looking for the RG Shin Matsunaga MS-06R-1A kit….it would be nice if anyone knows where to get this rare kit…your help would be much appreciated.

Aaaah, yes….some EFSF MS Goodness…..Zeon is not the only side that is getting some love from the P-Bandai chaps this week… We also have announcements for 2 new P-Bandai GM’s (well not technically new P-Bandai GM kits) that are set for release in this coming September.

And the very first GM P-Bandai variant that we will be talking about today is the RGM-79 GM White Dingo Corps Version.

Essentially this kit is practically is the same kit as the retail’s MG GM Ver.2.0 (released back in Feb 2009), but with a little twist. This version doesn’t just get a new paint job treatment, it as well gets a different shield unit (taken from the MG GM Ground type) and the pretty impressive looking NF GMG-Type.37/100mm Machine Gun (as well another weapon taken from the MG GM Ground type) together with its existing weapon sets.

As well this version of the GM comes with unit specific decals and just like we mentioned before…a pretty sick looking new paint job. We have to say that the new color scheme for this variant of the GM that we see here does make the idea of owning an another GM kit look pretty promising.

However, that is not the only GM White Dingo Variant that we are getting…we are as well will be getting the….

Another kit from the White Dingo Corps that is set to release in this coming September. However, unlike all the previous kit that we talked about here…this is the only one that is originally released as a P-Bandai and now is seeing itself into another P-Bandai release.

So, what we have here is the most P-Bandai-iest MG kit out of all the other MG P-Bandai kits released thus far. Haha.

For this variant, the GM Cannon does get quite a few new armors sets for its legs, chest and a slightly elongated head unit. It does as well have a cannon mounted on its new chest armor. However, we aren’t sure if all the changes made here on the GM Cannon would as well translate to a new inner frame mold or if they would ditch the inner frame configuration for this variant.

Regardless, we feel that until we have this kit in our hands. It is hard for us to judge if that is really the case, since from the promotional pictures… there is no indication that P-Bandai made any major changes. So we really have to wait till we have this in our hands, for now, we can really only speculate.

This variant as well gets a different set of color scheme too as compared to its previous counterpart. On the white dingo version of the GM Cannon, they are sporting the same grey and white color scheme of the MG GM White Dingo Version as opposed to the black and red of the previous iteration.

Though with that being said, it still shares the same types of equipment’s that the previous iteration of the GM Cannon has.

Overall, we have to say that both of this MG GM’s does look quite promising and we are quite excited to see this reach our shores in this coming September. The only thing that sucks for us about getting this two kits now is the fact that getting the GM Sniper II White Dingo Corps Version now is practically almost close to zero since P-Bandai has stopped the production for this and so far there is no news of them re-releasing a new batch of the GM Sniper II White Dingo Corps Version.

Yes, you heard that right. we all missed the chance to get the White Dingo Corps Version of MG GM Sniper II and now we are suffering because of it….

But we really hope that we would still be able to find it before the NEW-ish P-Bandai GM’S arrive…..well if ever arrives here anyways…

God, we all start to shiver when we think of all the kits that we are going to be getting in this few months….we really don’t think our wallet can stand all this awesomeness coming soon….We pray that we would have some windfall of money soon, that would definitely help us to get all of this awesome plastic shit.

With that ends our 59th episode of our Let’s Talk Gunpla segment! Its been a while that we have such huge P-Bandai announcements …though we have to say that this time the announcement wasn’t looking as bad for the wallet as we hoped that it would be. P-Bandai is really showing some sort of restrain here. However, we have a feeling that…P-Bandai is still definitely have something big on the horizon…well let’s hope it won’t be that bad on our poor wallets.

Anyways do let us know here of what from these kits that you are looking forward in getting or seeing more of and just know that we always look forward in reading and responding to your comments and thoughts of the kits and as well to this post!

We will be back with more Let’s Talk Gunpla Segment on the next coming Wednesday and Kimi will be back this Sunday with the final chapter of his MG Justice review saga. So do look forward to that!

As ever please do leave us a like if you enjoyed this article, as well do give us some feedback and suggestions if you think we would be able to improve further in making sure that we can give you all a better content in the future! As well, we want you to know that your likes and shares are highly appreciated in supporting and helping us grow further, honestly, your love and support means the world to all of us here in Kimi the Builder Blog editorial team.