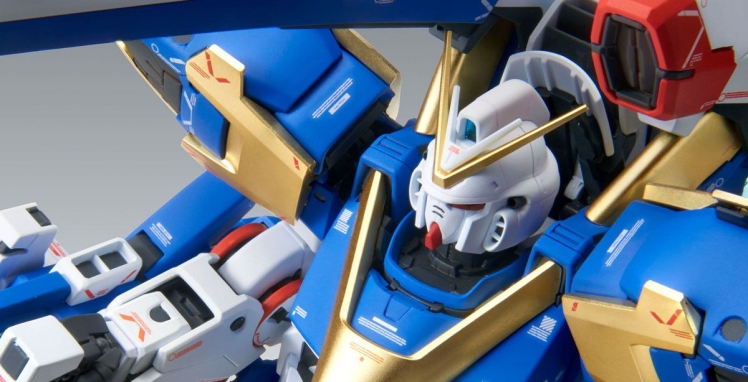 There is a lot of MG announcements this week eh?

Welcome back! We are back this week with our 77th edition of our Let’s Talk Gunpla segment and this week…we are going to be talking about a lot of awesome MG news coming from them P-Bandai chaps this week and we as well have one retail (possibly) MG news that is quite unexpected…. but one that has been a long time coming for the most of us here that has been waiting for it since the release of the MG Exia….yes, we are going to be talking about a surprise MG kit from the 00 universe….

So, without further ado let us move on to the news shall we?

YES, it looks like we are getting one of the most expensive V2 Gundam variants coming in this December…and one that…admittedly looks quite bloody awesome.

Just take one look at it and tell us if we are wrong for saying as such.

There is a few changes and additions that were made to this variant over the original V2, like the use of gold bits on some sections of the kit and as well all the awesome Assault-Buster parts.

Though from what we are seeing there aren’t any major changes that were made to the V2’s overall look itself but the additions made here is more than enough to make this purchase worth it. Honestly, we wouldn’t mind getting 2 MG V2 variants, the normal V2 and this insane V2….though we admit that might be a little bit too much to some….

Yes, this time it seems like P-Bandai was kind enough to not just release a full V2 Assault-Buster Gundam, but they as well thought of just releasing just an expansion pack for those that weren’t that keen in getting another V2 Gundam.

Which we do think it’s a nice change for once.

However, there are some things that weren’t included in this set like for an instance the Awesome beam rifle with the grenade launcher attachment and as well it does look like on the Expansion pack…the golden parts look less…. shiny when compared to the full version.

Though we don’t think it’s a bad thing since in the expansion pack you do still get a lot of awesome things included in. Which does make it a pretty good purchase to those looking not to spend too much cash on the same version of the kit?

Regardless, we are quite happy on how things looked like for both variants and honestly, we are really looking forward in getting the two of them in this coming December and we do honestly think that this would make a pretty good Christmas gift…for sure.

When Kimi reviewed the GM II earlier this year…. We thought that there is no way that we would be seeing them release another GM II variant so soon. However, it seems like apparently P-Bandai is not done with their MG GM II’s since now they are set to release another MG GM II variant in this coming January ’19.

However, unlike the one that Kimi reviewed earlier this year…we do think that this might be the best and much improved P-Bandai MG GMII Variant yet.

Well for starters, the biggest issue Kimi had with the GM II came down to the stability of the whole kit, well more precisely he was quite pissed off with the GMII’s feet. With this variant, it does seem like they have finally addressed the issue with giving the GMII a much more good looking and bigger feet unit then the Original version’s. Which in turn we do think would make this version of the GMII more stable when having it do a wide array of poses.

As well, it does seem like P-Bandai as well made some changes to the GMII’s armor set, the semi striker armor set which honestly really made the GMII look quite badass! Not to mention they as well used a different color scheme too for this version. However, real talking points for the GMII Semi Striker is when we get to its weapons.

Oh yes, the weapons…why are we excited since with this version we finally we get to see the Twin Beam spear in MG form for the first time and to be really honest? It looks even more BADASS in MG form then it did in HG (with the HGUC GM striker) form.

Honestly, it does seem like P-Bandai is REALLY going all out in making us broke af at the start of the year….and for once we all can agree that this coming Jan is going to be one that we all look forward too…

However…there is one piece of news that…kind of overshadows every single P-Bandai news here….

Finally, we get to the LAST announcement for this week and the ONE THAT WAS ASWELL REALLY UNEXPECTED.

Yes, we are talking about the REVEAL of the MG Gundam Dynames!

Since the end of Gundam 00 and the release of the MG Exia…we have been waiting for them to announce the other Gundam Meisters Gundam’s in MG…. instead…we have been treated with many variants of the Exia and the 00 Gundam. Not to say that the MG Exia’s and the 00’s is bad but we do want other Gundam meister’s Gundams too for a change.

but now finally things are starting to look up (we hope) and it does seem like we are getting more Gundams from the 00 Gundam universe.

Well, that is if this kit does well of course…and I really hope it does too because… Goddamn, it looks good and I can’t imagine how the rest would look too if they do have plans to release them…

Since it seems like there isn’t much info to go around…but we wouldn’t be surprised if some elements of the Exia was used in the creating this MG kit. Since there isn’t much that we can confirm…for now, that would just be our speculation of how the Gundam Dynames would be.

Though it must be said that from what we are seeing…the kit does look quite huge. Not in terms of size…but in terms of…when we take a look at the MG Dyname’s Armor packs and all the goodies that this awesome MG would come with… Well, technically that is what considered to be huge. In terms of price we are expecting this to be sold at the RM200 – RM300 mark (Around $50 USD – $70 USD).

Honestly, by only looking at much stuff, this MG kit is getting we wouldn’t be surprised if that really is the price range of the upcoming Dynames. As well looking at how late the reveal of this is, we feel that this is most likely would be a 2019 MG release for sure…because we really feel like there is no way in hell that we would be seeing this year…

Unless Bandai really wants to make our Christmas more joyous. But honestly, we don’t think that we would see it being released for this year.

Regardless, we are quite excited for it and really looking forward to more awesome news from Bandai and it looks like we are going to have an awesome 2019 indeed!

With that ends our 77th  episode of our Let’s Talk Gunpla segment. We are getting some MG love from both the P-Bandai side and the Retail side! By the looks of it we are not just looking at good year-end and an awesome start of the year, we are as well will be looking at a really awesome 2019 ahead too!

We are definitely excited for the upcoming year ahead! 😀

Anyways, we will be back again next week with more Let’s Talk Gunpla Segment on the next coming Wednesday and hopefully, this week Kimi will be back again this Sunday with possibly the review for the HG 1/144 ZGMF-X099T Dom Trooper. So, do look forward to that.