Finally, one that we can really say that its a pretty short and sweet review

At the time of writing this and as you guys as well already know the progress of the MG Full Armor Gundam is going at a quite slow pace. Since prefer not to rush doing the review and building the kit. As well at the same time not to leave the week with no reviews or what so ever, I decided why not I’ll do another of the lovely short reviews, taken from that sweet line-up of kits from my lovely backlog.

Though I admit that there is a few nice SD’s that I had in my collections and which I would LOVE to do a review of, but I figured since they are just too nice to just simply do a short review of, why not this time I take on something that is a lot more different then what I’m more accustomed to? In which kind of led me to this, a very particular kit that I get as a free item during Bandai’s last year’s Mid Year Campaign.

A thing that I feel is quite hard to get, since it restricted to only be given as a freebie to anyone that bought RM 200+ (USD $48.63+) worth of kits during the 2018’s Mid-Year campaign and not to mention this was as well were given up to a first come first serve kind of basis, made it an even harder to get.

Even though this particular ‘HG customize campaign’ started well back in 2015. I have never found myself to be lucky enough to get one of them parts since it would always be out of stock whenever the campaign started. So that is why I was quite surprised when I finally get one of this very interesting kit and quite rare parts last year, it’s not every day that my luck was that good, to be honest.

But…..I have to be honest when I saw the packaging, I was a bit underwhelmed.

Well just take a look at the cheap looking packaging here…. I know its free and all but just look at that packaging. 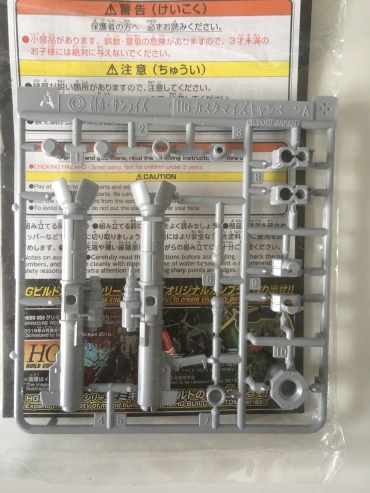 because it comes in a small plastic bag

Damn, that is one cheap packaging.

However, despite the cheap looking packaging, I was still quite impressed by the level of detail that is seen on the parts and as well the number of customizable joints that are included here. Not to mention the awesome manual booklet, even though it comes with no lore or anything in the booklet but it was quite nice to see what the parts that were included here could do in making customizing kits easy for builders that are working on their HG builds.

But how does the thing work and built you may be wondering.

Well, to be honest, since I haven’t really moved most of my completed HG kit collection from the old home base to the new I and not to mention the HG kits that I do have here is either I really haven’t started working on them yet or they have parts that had similar joints which don’t really make sense for me to use the parts up. So, yeah I really don’t know how well the parts would work in real life with the included parts. I may update this review in the near future when I could get a kit to try on the interesting parts up but for now, all I can say is that… it is exciting to know that I now do have the proper tools to properly kitbash an HG kit. All I really need now is a kit to really try out all of them interesting idea on.

That is really quite a thing to be looking forward to!

However, I did work on the bazooka bit of this kit and I could say it was quite good, though I admit that it isn’t something that is mind-blowingly to awesome to build as the other previously built awesome RG and HG’S that I’ve made but still it is still quite fun to work on. The fact that it is so simple in terms of the construction and still at the same time still manages to be quite a fun kit to make does manage to impress me a lot. Plus, with its war-winning looks and the insane level of detail that is seen on the bazooka, it is really hard to not look at this kit and love it.

As well I do appreciate the fact that the parts that are included here are not fully colored since it is something that was developed to have the parts to be fully customizable. Which does make sense here since it would definitely encourage people to WANT to paint their uncolored parts to match the kits that they are pairing their joints and parts too?

Honestly, I really like what they are doing here. It really encourages people to want to work on customizing their existing kits and what’s more, it as well encourages people to want to kitbash their kits with some insane parts from other kits. I admit that it already made me want to try to see what parts that I could experiment with, to see what awesome combinations that I could do with all these awesome additions that we are given.

This is definitely one that I would recommend getting…if you are lucky enough to find one lying around in your local Gunpla Shops because really I do feel that this is worth all your hard earned cash to get. As well I do hope that Bandai continues on the campaign because really I wouldn’t mind getting more of these awesome small kits!

With that ends my review for the HG Customize Campaign 2018 A! What do you think of both the kit and the review? I do love this simple but quite an interesting thing this and one that I have to admit I wish I have more of. I do think that this is really a good way to encourage people to buy and kitbash their gunplas into creating some interesting looking gunplas and as well encourages people to be more creative with their builds!

I wonder what kinds of parts will we be seeing for this year’s campaign!

One thought on “HG Customize Campaign 2018 [A] Review”