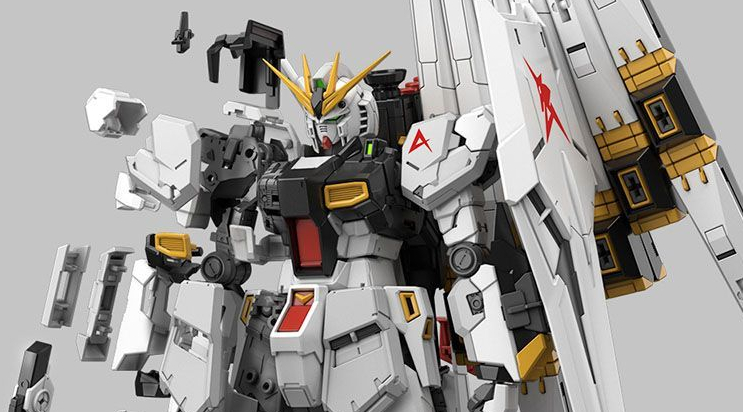 HELLO! We are back!

In this week’s 102nd edition of our Let’s Talk Gunpla segment, WE will be looking into one of the most exciting Retail releases since it was unveiled last week. The one kit that we feel would be something that would rival last year’s RG Sazabi, which so happens to be its opponent in the Char Counterattack saga.

It is as well one of the only release announcement that we kind of expecting to see Bandai make after releasing the RG Sazabi last year.

So without further ado, let us get into it, shall we?

This was really one news that when we all saw it, really made all of us here smile. It was one kit that we are really looking forward too, ever since the release of the awesome RG Sazabi last year.

and from what we are seeing here the RG ν Gundam is looking pretty promising. So promising in fact that we feel that if the RG Sazabi was the best RG kit that has ever graced us all here last year, the upcoming RG ν Gundam we feel might be the strongest contender to take that throne away from the RG Sazabi this year.

No offense to the RG Crossbone tho, but dun worry we are still getting you as soon as you are out >.<

Because from what we are seeing here Just like the previously released RG Sazabi, the RG ν Gundam looks like it uses many of the same design is used on the MG Ver.K.A…well without the Psychoframe thing on it of course. We are honestly really quite impressed with the fact that they managed to scale down many of the same MG designed inner frame bits and the armor bits to this scale and seriously, if they keep this up we won’t be surprised if the future RG iterations would have insanely detailed kits.

Although all of this is quite impressive, we do wonder if any of this would affect the whole stability on the kit. Coming fresh from the RG Destiny’s build a few days back, we can’t help to worry that the kit might not be stable in real life. But after seeing on how they managed it with the RG Sazabi.. we don’t really think Bandai would have any problems pulling this one off well too.

Another thing that we noticed, that in terms of the color scheme for the RG ν Gundam it seems like they are playing it quite subtly here. Because unlike like the other previous entries (Which include the RG Sazabi of course) where they would use obvious two-tone schemes on each individual sections of the kit, the Rg ν Gundam, however, they only use very subtle 2 tones scheme here.

The ν Gundam is DEFINITELY the one that we are really looking forward to getting and hopefully, this would be as good or better than the RG Sazabi…

With that ends our 102nd edition of our Let’s Talk Gunpla segment! What do you think of this week’s Retail kit announcement? Are you looking forward to the shiny RG ν Gundam as much as we are? We do think that this would be one to look forward too and to think that we are going to as well get the RG Crossbone this month….dang it does look like we are having a pretty insane 2019 RG kit releases this year.

Hopefully, we would continuously see more and more insane RG kit releases in the future.

Anyways, we will be back again with more Let’s Talk Gunpla Segment on the next coming Wednesday and this Sunday Kimi will be back with a review or an unboxing! So do look forward to that!