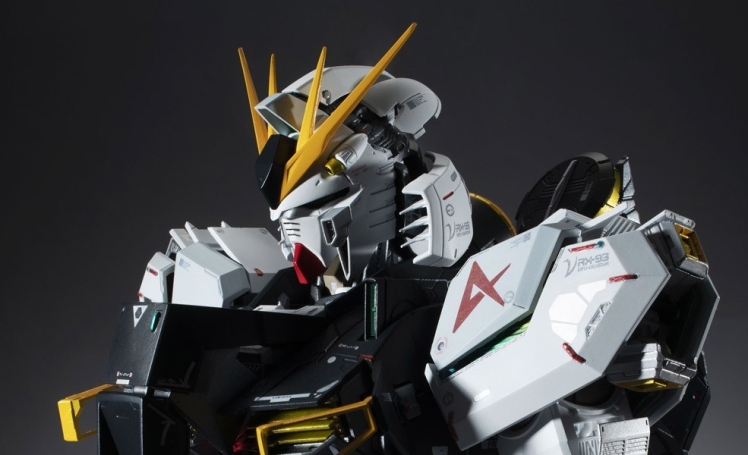 No kidneys were sacrificed for this one

HELLO! We are back!

In this week’s 109th edition Let’s Talk Gunpla segment, we will be doing something completely different. Since this week we are not talking about a gunpla release, but instead will be talking about one of the biggest Gundam related things that were just announced recently, and it was on something that….well frankly most of us here would never be able to own…

That is even if we all here sold our kidneys.

So without further ado, let us get into it, shall we?

We thought the most expensive thing that we would see the retail side would ever have released would be the PG kits. Heck, we never even thought that Bandai would make anything that is more detailed and expensive than any of the PG line up.

But today we learned that Bandai can outdo themselves if they put their minds to it (and some R&D money to it too of course) to create something that defies anything that we know about what Bandai can or cannot do.

Well technically we didn’t learn about it today, we actually have known about this since it was announced last week…haha…

But one thing that we can confirm is that when we all saw it for the first time we were all here dumbfounded by both the sheer scale and detail of this massive thing. We were surprised to see Bandai release something that is even more detailed than the PG kits that we’ve seen to date. As well when you consider that this is mostly made by metal it makes it even more mind-blowing.

Why? Well because even though Bandai has been making mecha figures that are metal based, but they have never had yet attempted to create something in the 1/60 scale. So when first saw it we thought there is no way that this thing, would have any articulation to its limbs due to the weight. But yet somehow they managed it because from the promotional pictures that we are seeing here it does seem like the limbs have some form of articulation.

Yes even though from what we are seeing from the promotional picture the limbs does have some limited movement to it, but still it was still quite impressive that you can still have the whole thing move and holding the said position up.

Yes, overall this is looking to be one impressive thing to have…and the look and the articulation is not the only thing that is impressive here, because the asking price for this monster is as well looked to be quite impressive.

Well to if we were to put things into perspective, last week when we saw apple’s ridiculous asking price for a stand, we were all here laughing at how ridiculous that thing was. But when we all here saw how much Bandai was asking for the Metal Structure ν Gundam, it made us feel bad for laughing at apple now.

For 88,350 yen, this is probably one of the most insanely expensive things that we have seen that comes out from the retail side to date. Even though we do understand for that price you do get alot of Gundam compared to the Ridiculous Apple Macbook monitor stand. But still looking at that asking price, we can’t imagine anyone being able to justify getting it when you can always get a few PG kit with that kind of asking price.

But even then it’s not stopping people from flooding in, to pre-order this insane monster, because at the time of writing all P-O’s for this insane monster on the official sites has been closed. We assumed it was due to the overwhelming demand for this metallic monster has.

Or it could be a marketing ploy from the retail side to increase the demand for the insane metal monster, who knows?

But even though we are really impressed by the sheer insanity of both looks and price of this metal monster. We do admit that we aren’t all that interested to get it. Call us old Gunpla-fashioned, but considering the fact that all of this is already prebuild for us upon getting it…. we are not really keen on that idea to be really honest.

Don’t get us wrong, we do love what we are seeing here. It’s just that we prefer to get something that we can get our hands dirty.

So yes, as impressive as it may we would definitely give this one a pass and for once it wasn’t because don’t have any organs left to sell.

With that concludes this week 109th edition of our Let’s Talk Gunpla segment! What do you think of this week’s Retail announcements? Are you looking forward to the upcoming Retail offering? It’s nice to see the retail side finally have something VERY interesting to talk about, although it makes us wonder if they actually do have actual plans to bring the ν Gundam as a PG release eventually? Or do we have to wait for them to release the PG Sazabi for the ν Gundam to happen? Like what they did with the RG platform?

Whatever the case it may be, we do hope that with the kind of reception people are giving the Metal Structure ν Gundam. We do hope that it may be enough monetary motivation for them to consider making the PG ν Gundam a reality.

Anyways, we will be back again with more Let’s Talk Gunpla Segment on the next coming Wednesday and hopefully, this Sunday (or on Monday morning) Kimi will be back with the review or an Unboxing of a kit! So do look forward to that!